Father Janíček in 1994 Named after the Holy Hostýn pilgrimage shrine in eastern Moravia (http://www.hostyn.cz), Hostýn camp was founded in 1954 by the Czech Jesuit P. Bohuslav Janíček S.J. (1919-2002). Father Janíček’s goal was to provide an affordable summer camp for the children of Czech and Slovak immigrants. For the camp’s first year, Father Janíček rented a piece of land in the Laurentians’ forest, near the town of St-Calixte. The 25 children that participated to the camp slept in tents for the five weeks the camp lasted. The following year, in 1955, Father Janíček bought 23 acres of the land and started to build permanent summer camp facilities with the help of volunteers such as the Štrbáňek family, Magdalena and Josef Janíkovi, Milan Bojsa and others.

In that year, they build the main building with the kitchen and rooms for the cooks. On May 9 1955, the camp was put under the administration of the Czechoslovak Welfare Association, a charity organization. In 1956, the volunteers were able to complete the dining room, and in 1957, electricity was installed, a well was dough and running water was made available in the kitchen.

For the first few years, both children and counselors slept in tents. In 1959, cabins begun to be built, this gradually replaced the tents for lodging.

The cabins each held 3 beds, one wooden table, an electric light, and a shelf above each bed. The cabins were built in two circles of 11 at different locations, one group for girls and the other one for boys. Two additional cabins were added for counselors. Near each group of cabins, an activity hall was built. 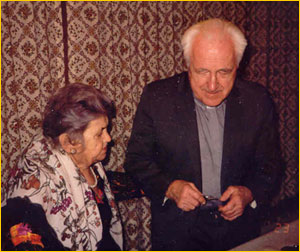 Father Janíček in 1994 with one of his Slovak friends, Mrs. Štrbáňek

In the girl’s part of the camp, a little church was built, consecrated to Mary Svatohostýnska. The bell for the church was brought by Father Janíček from the province of Saskatchewan and was consecrated on August 11 1961 by Father Bishop J.A. Papineau from the town of Joliette. This consecration was in fact the first annual gathering in the name of Mary Svatohostýnska, gathering which has been held since and is known today as the annual picnic. For various reasons, the date of the gathering varies slightly every year. The summer camp continued to have a great success, with about 140 children attending it per year. At first, the children were mainly from Montreal, but later also children from Cleveland, Chicago, Toledo, Toronto, London, Hamilton, Windsor, Ottawa and even New York, Texas and Sweden began participating. After the so called 'velvet revolution' in 1989, children from the Czech Republic and Slovakia also attended the camp. These children are now grown have a webpage named Tribute to the Father.

The camp was also visited by some important clergy people like cardinal Josef Beran and cardinal Tomáš Špidlík, which attended the 50 year celebration of the camp in 1999 (see picture).

In front of the girl’s activity building in 1999, From the left: Ivan Strážnický, Jiří Horák, Marta Strážnická, Father Janičík from Slovakia, Mrs. Štrbáňová and cardinal Špidlík

In 1992, Father Janíček decided to retire and donated the camp to the Loyola High School because he thought that the camp’s attendance was falling too much. The Czechoslovak Welfare Association was also shut down. Unfortunately, after doing a few repairs, the new owners, a group of Montreal Jesuits, soon abandoned the camp. The camp was left unused and in a state of disrepair until the foundation of the Hostýn Association in 1997.

If anyone would like to provide additional information about the camp’s history, please contact the webmaster at: This email address is being protected from spambots. You need JavaScript enabled to view it.

In 1992, the Hostýn Camp was donated to a group of Montreal Jesuits because of Father Janíček’s retirement and a decline in the number of children participating. The traditional annual picnic however continued to be held every year on the camp’s site. During those gatherings, people noticed the camp’s bad condition and were disappointed by it. Father Janíček also realized that the camp was not being care for and began negotiating with the Jesuits to get the camp back. On December 5 1997 was founded the Hostýn Association, with the mission of supporting the moral, intellectual and spiritual development of Czech and Slovak people.

The Hostýn Association took control of the Hostýn camp from the Jesuits on April 20 1998. Volunteers worked hard the first years to restore the abandoned buildings. The camp was used as a recreational facility for families and hosted several special events per year.

There was no plan for a children’s summer camp until 2002, when the Toronto Masaryk Memorial Institute (M.M.I.) closed its summer camp and decided to work with the Hostýn Association to create a Hostýn summer camp. The M.M.I. took care of the finances, provided children and counselors. The Hostýn Association repaired the camp’s facilities, built a new shower and toilet building and took care of the cooking and camp direction. The first camp not under the Father Janíček’s direction was held in the summer of 2002 and had a great success. The following years the camp was also near its full capacity (of 66 children at one point in time). A new private beach was bought for the children’s use in 2003 on the Lake Lafond.

We hope to continue offering the summer camp and community activities for many more years. 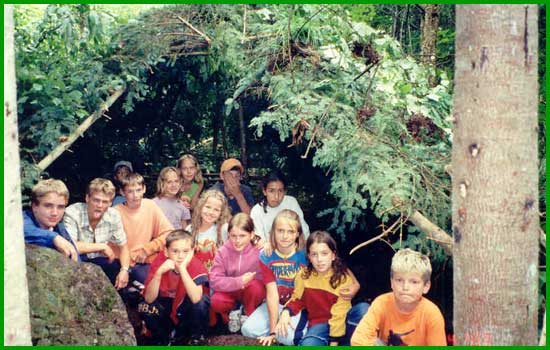 A hut in the forest built by children in 2003

Anyone who wishes to make a donation for the camp’s maintenance and improvement can do so on Online payment page.